Nidaros Cathedral is the largest and northernmost medieval cathedral in the world, built over the tomb of St Olav. The oldest parts are from the 12th century.

The constructions began in 1070 to memorialize the burial place of king Olaf II of Norway. It was designated the cathedral of the Roman Catholic Archdiocese of Nidaros from its establishment in 1152 until its abolition in 1537 under the Reformation.

Since the Reformation, it has served as the cathedral of the Lutheran bishops of Trondheim (or Nidaros) in the Diocese of Nidaros. The architectural style of the cathedral is Romanesque and Gothic. Historically it has been an important destination for pilgrims coming from all of Northern Europe.

The Church of Our Lady

The oldest part of this distinctive church – The Church of Our Lady – was erected in the 12th century. It is the third largest extant medieval church in Norway. After the Reformation in 1536 the church was expanded, and parts of the original brickwork are well preserved. The victim of many fires, it was restored in 1739, but parts of the walls are obviously much older. The first tower of the church was built around 1640, but the current tower was built in 1742 and the spire was erected in 1779. However, the eastern part of church is identical to the “Church of Our Mary” from the end of the 12th century.

The present altarpiece, made between 1742 and 1744 by Heinrich Kühnemann, was originally intended for the Octagon in the Nidaros Cathedral. After about ninety years in the Octagon, the colorful altarpiece went out of style, and in 1837 it was donated to The Church of Our Lady. The empty tombs below the church are very elaborate and referred to as “Trondheim’s catacombs”. On the church wall you can see Runes which were etched into the stone 800 years ago.

The Archbishop’s Palace was the residence of the Archishop of Nidaros and the administrative center in Norway up to the Reformation. A total of twenty seven archbishops had their seat here until the changes that were brought about with the reformed church. The main hall is situated in the oldest part of the building, constructed the twelfth century. The grand hall served as the main reception room in the complex of the Archbishop’s Palace.

In the 1160s, a free-standing chapel was erected to the north of the choir of Nidaros Cathedral, which today is known as the Chapter House. It had originally been connected to the rest of the cathedral by a corridor. It was probably used to house relics and other valuable items, especially the golden ring that contained the holy blood. A child’s grave has also been found in the south wall, probably containing a member of the royal family. The Chapter House contains no sculptures, this being in accordance with the Cistercian’s prohibition of such items. The Chapter House has both rounded Romanesque arches and pointed Gothic arches – the first examples in Norway of the new style. Many of the details and images would suggest that both the inspiration and some of the craftsmen came from York Cathedral, where, in the 1150s, Archbishop Roger had built a large new choir in exactly the same style. 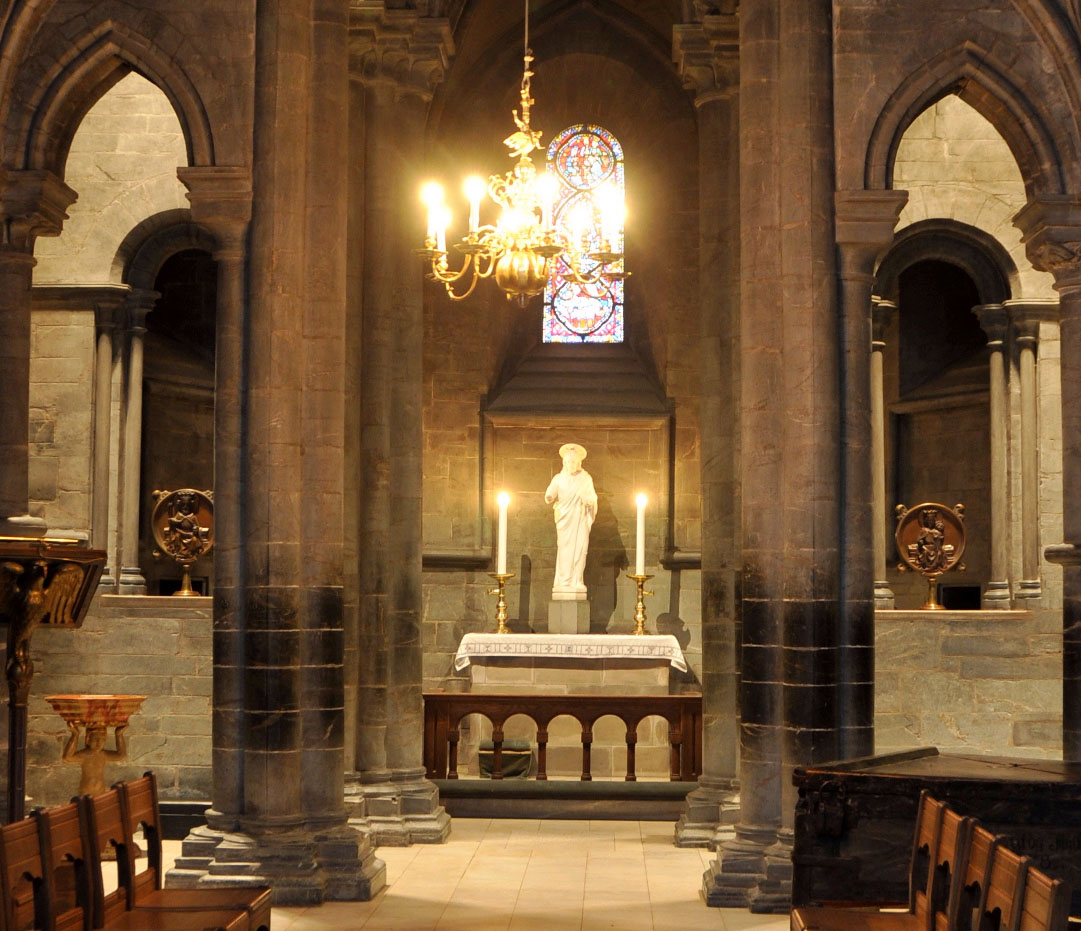 The Cathedral College was founded in 1152 and is the oldest teaching seat in Norway. The most ancient present day building dates from 1787 and houses the magnificent college hall. The building was designed by court appointed architect Caspar Fredrik Harsdorf in a neoclassical style. The hall has served as the main lecture venue for the Royal Norwegian Academy of Sciences, Norway’s oldest academic institution, since the Eighteenth Century, and is still used by the society for academic lectures. The outstanding acoustical features make the hall a perfect venue for chamber music performance, and period instruments suits room particularly well.